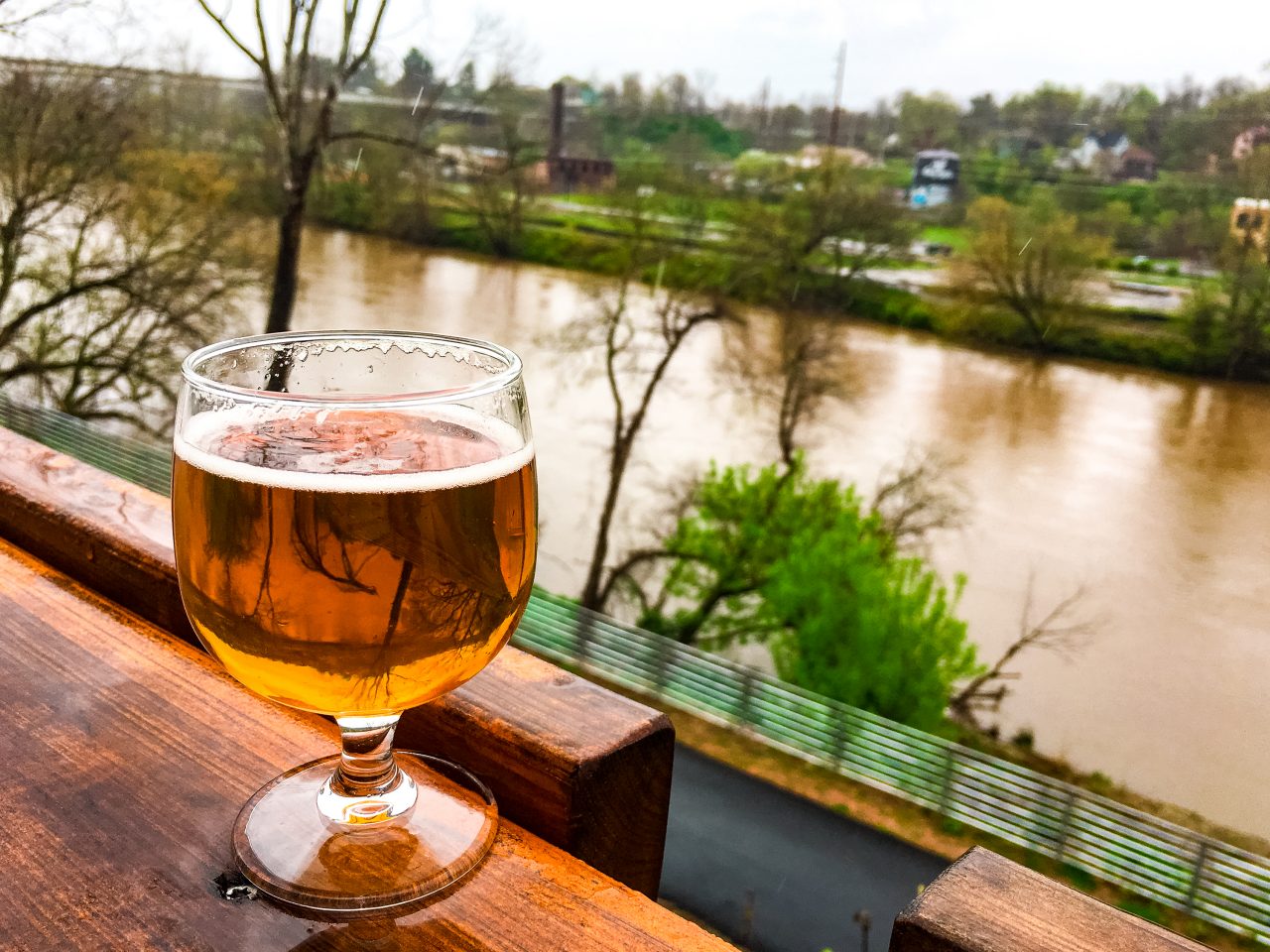 1shares
In the last few years I’ve started to try and go somewhere for my birthday. For some reason, planning a gathering of sorts with friends in the city has started to stress me out, so I’d rather use the day as an excuse to go somewhere. This year, as my 29th birthday rapidly approached, I thought I better figure out where to escape to this year.
My parents recently moved to the Raleigh, North Carolina area so a trip to see them seemed like a good idea. But then I started thinking about how I have been wanting to go to Asheville in western North Carolina for a while. My friends know I’m a craft beer nerd, so I have been constantly told this was a place I needed to go. I called my good friend Sarah, who happens to live in Durham, asked if she would be interested in a weekend trip to Asheville, and to paraphrase, she said “duh.”
For those who aren’t familiar with Asheville, it’s known for two things: it’s proximity to the mountains and Blue Ridge Parkway as well as it’s epic craft beer scene. Sarah and I could only go for one night, so we had to figure how to go to as many breweries as possible and still squeeze in some mountain views. Below is more or less what we did (although some intense rain storms on Day 2 de-railed our schedule a bit).

Saturday, Day 1
There is apparently a small airport here, but chances are you are driving in from somewhere. I drove in from Durham, which is about 3 hours away. As a NC resident, Sarah had gotten the inside scoop from her coworkers, who recommended stopping in the small town of Black Mountain for lunch. It’s about 20 minutes east of Asheville, so it’s fairly quick to get to even if you aren’t coming in from the east. State Street is the main street in town, but Cherry Street and Broadway Ave (which are off of State) also had lots of cafes and shops. There is a free parking lot at E State Street & Richardson Blvd, which is close to all the action. For lunch, we chose the brewpub Black Mountain Ale House. They have an outside patio area with some nice mountain views and serve lots of local NC beers. After lunch we walked around a bit. Sutton Ave, which runs along the railroad, has a few more shops and also you can see the old railway station, which is now an arts center, as well as an old caboose which I’m not sure what it is. 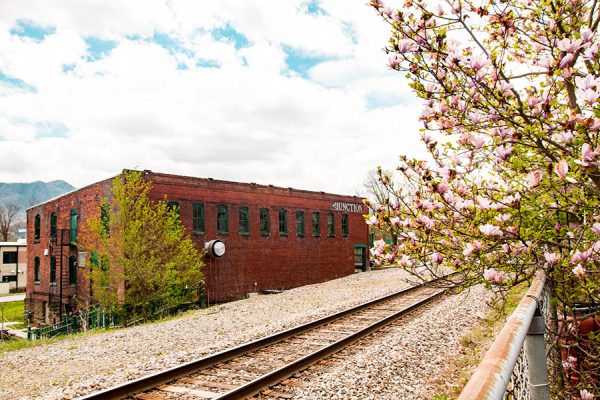 Now it was time to head on to Asheville. The hotels in Asheville are fairly expensive so we stayed at The Beaucatcher Motel, which seemed to be an old motel that was redone to appeal to hipsters. I have no real complaints about this place, except us and several people were at the motel at 2:30 for a 3pm check in and there was no one to be found at the front desk. Someone tracked down a maid who tracked down the front desk person, who seemed to think it was unlikely that rooms were ready. It’s only 30 minutes before check in, I don’t need your drama. Anyways, we checked in, and called a car service to bring us downtown so we didn’t need to worry about parking or driving. It was $6 and no more than 6 minutes to get there. Now it was time for what we (and everyone else) came for, – the breweries. I didn’t have a real plan here, just an idea of some breweries to hit up, so we started out at Wicked Weed. If you have done any research about Asheville, this brewery has definitely come up.
[one_half] 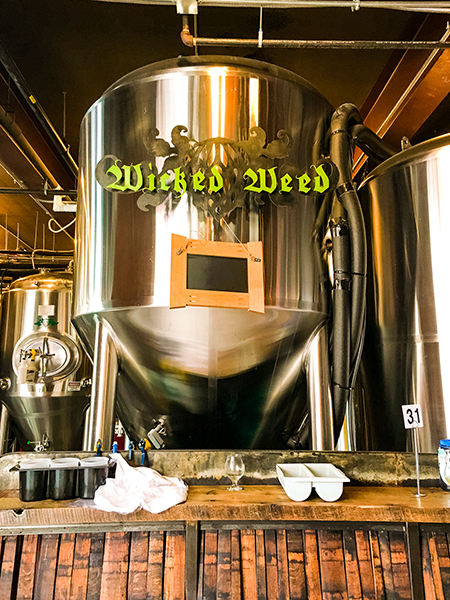 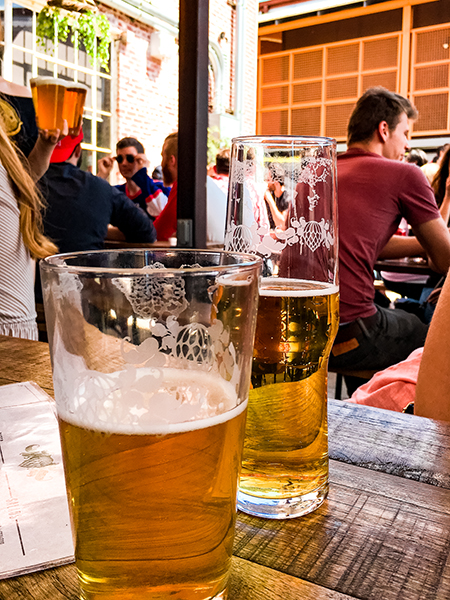 [/one_half]
Wicked Weed is massive. They have huge outdoor and indoor areas, TONS of beers on draft, food, etc. Sign up for their tour at the bar downstairs (do this first thing because you will probably have to wait an hour or so for the next tour as they fill up fast). We sat in the downstairs outdoor area and I tried one of their IPA’s (I’m sorry, I can’t remember which one, they have only about 1000 to choose from, but it was delicious whatever I had).
After we had one beer, while we waited for our tour, we went down the street to Green Man Brewery. Their taproom looks over their bottling area, which is pretty cool, and they have a nice upstairs patio where you can see some mountains. I tried their Wayfarer IPA, which was okay. They, like Wicked Weed, also have a good number of beers on tap. We had one more quick stop before going back to Wicked Weed for the tour- Sunshine Sammies for some ice cream. Their ice cream sandwiches look delicious, but we opted just for some ice cream. I got salted caramel with pecans on top, so good! I definitely recommend stopping here for a snack. 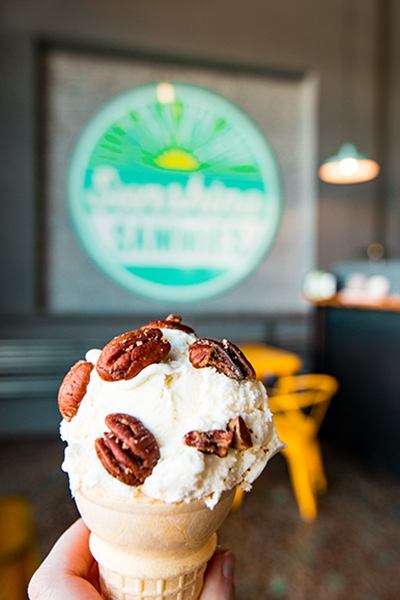 Back for the tour! The tour is free and lasts about 45 minutes. Some brewery tours are boring and you hear the same stuff, but our tour guide did a great job and the story of Wicked Weed is a unique and interesting one. There were only about 10 of us on the tour, so definitely sign up ASAP if you want to do the tour. We also got to taste four of their beers at the end PLUS you get a token to get some samples at The Funkatorium, Wicked Weed’s sour beer outlet. So clearly, that’s where we went next.
I’m not particularly into sours, but Sarah is. The Funkatorium is only a few blocks away from Wicked Weed and is a really nice space. They have a huge dog friendly patio and the inside is spacious as well. We turned in our tokens to try some beers, which ended up just being a flight to share between us. They have TONS of sours to choose from, so if you are into sours, definitely make this a stop. 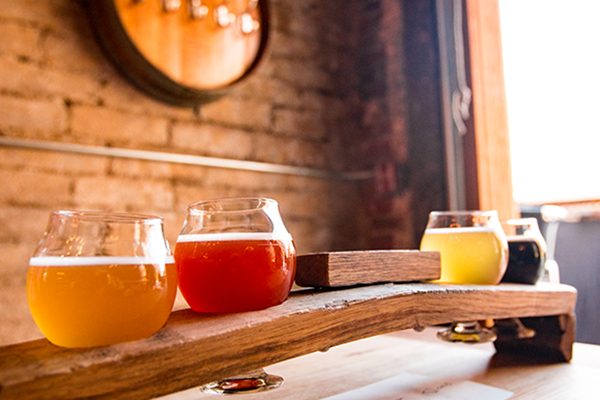 It was starting to get late in the day so we walked around for a bit to find a place for dinner. Most places we saw were pretty busy, and we were getting quite hungry, so we opted for Mountain Madre for some Mexican food as 1) you can never go wrong with Mexican and 2) it was less crowded than some other places we had looked up. Bonus, this place has a dog friendly patio in the back for those with dogs. I got some delicious enchiladas and sangria. 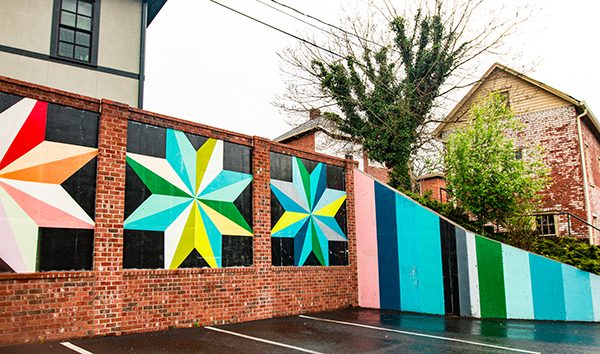 After dinner we tried to go to One World Brewing. We had to wait to get inside (which is kind of weird) and when we got in about 10 minutes later, they seemed to be out of most of their beers and all that was left was some IPA’s that really didn’t even appeal to me. I was bummed because I had read great things about this place, but we ended up just leaving and calling it a night.

Sunday, Day 2
First things first, brunch. Sarah had chosen Corner Kitchen, which is about 10 minutes south of downtown Asheville in Biltmore Village. This area was built by the Vanderbilts to house employees and the buildings all have a random yet cute Tudor look. I highly recommend making a reservation for this place as it was quite packed despite the pouring rain. It’s pretty classic in terms of a breakfast menu, but it was delicious and I loved that it was inside a house.
[one_half] 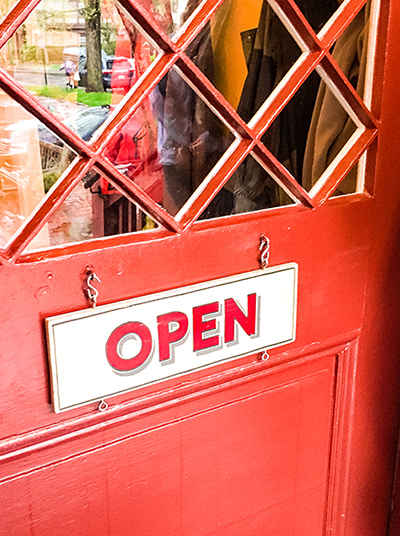 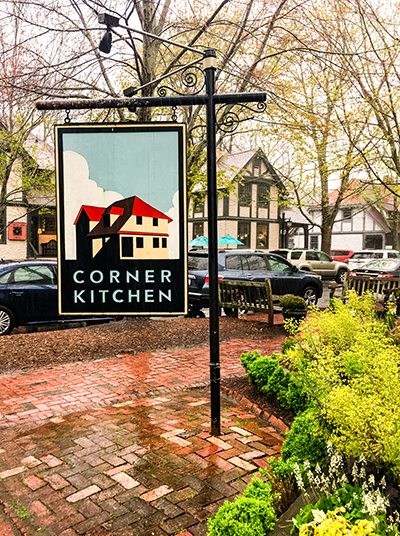 [/one_half]
Our original plan for this day was to drive the Blue Ridge Parkway on our way back to Raleigh/Durham, but with the torrential rain that made us second guess this plan. After brunch though the rain had let up somewhat so we decided to drive a little of it going south just to see what there was to see….which wasn’t much.
With the Blue Ridge Parkway crossed off the list, we decided to hit up a few more breweries instead. Both Sierra Nevada and New Belgium, although not originally from Asheville, both have giant breweries here (the water in Asheville is apparently top notch), so we decided to go to New Belgium. They have a fantastic location right on the river with a giant patio and a really nice taproom as well. They also do tours, but we passed as it’s 90 minutes long. I’m mostly familiar with their Fat Tire ale, which I honestly don’t love, but it was great to try some of their other many beers. I tried a raspberry lime sour, which I actually kind of liked! Basically a boozy cherry limeade. And their new Hemperor HPA was really delicious. PLUS, they have seltzer on tap instead of regular water, so that’s a win in my book. 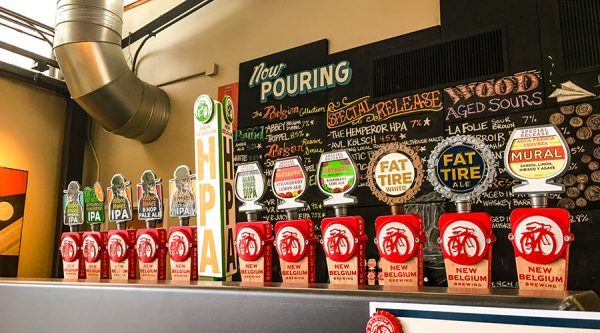 The rain had picked back up, so we decided to try and hit a few more breweries downtown before heading back to Durham. Our last beer stop was Bhramari Brewing Company, which also has a dog friendly patio, food and a huge assortment of ~non traditional~ beers. I kept it light as I was driving us home and went with their Painted Fortune beer, which is brewed with corn. It’s just exotic enough and was pretty good.
[one_half] 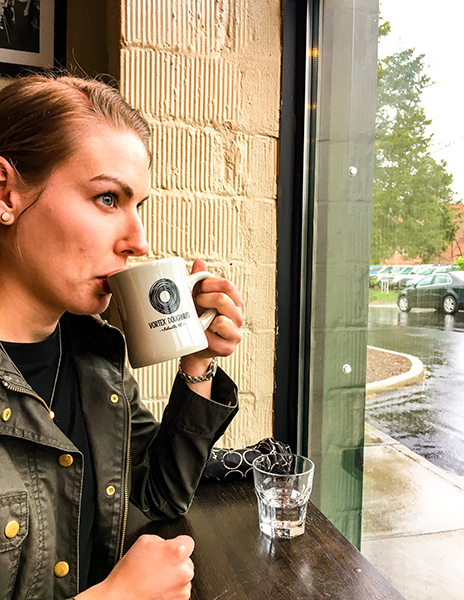 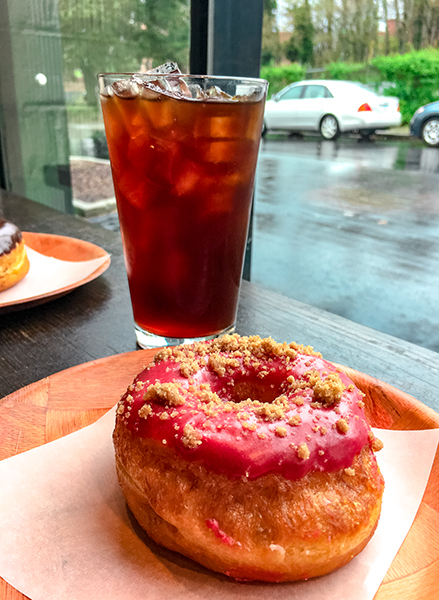 [/one_half]
Time to head back! But not before hitting up Vortex Donuts, which is close to The Funkatorium. Their cold brew was absolutely delicious as well as their raspberry strudel donut. Sarah kept it classic with tea and a chocolate sprinkle donut.
Final Thoughts

There are so many breweries here that I would recommend staying two nights. As Sarah and I have our Scandinavia trip around the corner next month, she was unable to get Monday off, which is why we only stayed one night. Also, this is one of the most dog friendly towns I’ve ever seen. I left my dog, Denali, in Raleigh with my parents but I could have easily brought her! And lastly, I thought it was an exaggeration that everyone comes here for their bachelor/bachelorette

I’ll definitely be coming back for a longer weekend! There are lots more places I want to try like Hi-Wire Brewing and Battery Park Book Exchange and Champagne Bar. Plus I need to see the Blue Ridge Parkway when there isn’t a massive storm happening.

Been to Asheville? Leave your favorite places in the comments! 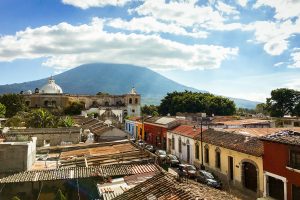 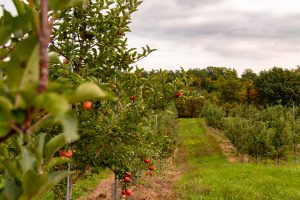